Every breeder starts somewhere, and for most it is at ground zero – pretty much blank slates. Some are lucky enough to have connections before getting started, but most ‘newbies’ must work hard to build their knowledge and network by participating in educational opportunities, clubs, shows, seminars, etc. To be taken seriously, the community requires them to ‘prove’ themselves, their dogs and their program to a socially acceptable standard. Connecting with a mentor dedicated to the breed and its future can make a significant impact on guiding new breeders/handlers in the right direction.

Breeding is fraught with inherent emotional and financial hazards; dogs who have been invested in for health testing and training don’t mature to meet aspirations/expectations and have to be scrubbed from the program, dogs fall ill and need treatment or die, puppies are lost during or after whelp, etc. It is hard, and it is time- and energy-consuming, WORK. There is nothing wrong with being a ‘newbie’ – if there weren’t any new people entering a field of interest, that field would DIE. Breeders are human, and humans are prone to errors. Both new and experienced breeders make mistakes. How those mistakes are handled demonstrate the true essence of the breeder and program. Learning from mistakes, and choosing to do better next time, can only elevate a program.

“Accountability is an acceptance of responsibility for honest and ethical conduct towards others.”  investopedia.com/terms/a/accountability.asp

“When you’re personally accountable, you take ownership of what happens as a result of your choices and actions. You don’t blame others or make excuses, and you do what you can to make amends when things go wrong.” mindtools.com

The qualities of a ‘good breeder’ are largely determined by social standards. There is a social standard amongst each of the various breeder cultures, and other social standards amongst various buyer cultures – there are potentially a plethora of others when considering rescues and animal rights groups and so on. What is acceptable to one culture or community may not be acceptable to other ones, even though they are otherwise similar. It makes navigating the field very tricky. However, a fundamental structure exists around the breed standard published by the national breed organization(s) and the breed required/recommended health tests, also published by the national breed organizations(s).

So this is where another sticky wicket appears. Different people have different interpretations of the breed standard; otherwise we would see judges selecting the exact same dog(s) in every competition. We accept that earning titles under different judges (at least 3 in UKC) mitigates some of the natural subjectivity, but there will always be some variation in how the written standard is interpreted and applied to a live animal – by judges, by breeders, by fanciers.

Not for the faint of heart

Why is the showing/breeding community getting smaller? In part, this is because the community is not always welcoming. Nearly every person in showing/breeding can share a story about how they were dismissed or treated badly by persons in the community – so much so that the experience made them want to give it all up and run in the other direction. Think of how many did just that! This toxic culture drives people away from showing and from becoming ethical breeders. Unfortunately, the most commonly given advice is for new people to grow a thicker skin. Is that really helpful? Are those the people we want to surround ourselves with?

So what can we do differently? How can we draw new and young people into this field? How can we engender ethical preservation behaviors and accountability? How can we build trust?

It is every member’s responsibility to embrace ‘newbies’ in an inclusive and supportive environment; to plant the seeds of love for this hobby, and carefully and meticulously cultivate it into a passion. We can do this by mentoring, formal or informal, freely sharing our knowledge and skills, and by using other forms of communication aimed at educating, inspiring and motivating people who are interested in, or have recently joined, the showing/breeding community. What harm would come from guiding and educating others, especially those who are new? Support one another, educate one another, inspire those around you and give each other reasons to keep improving! Let’s breed community; an inclusive culture that supports learning and continuous improvement.

Ruh-roh, here comes the back story

My one caveat is that you must also be prepared to deal with attackers – because, sadly, people who don’t know anything about you, your dogs, or your program will try to tear you down. And they will be cruel, and they will crawl into every facet of your life, even beyond any issue at hand, to try to find ways to make you look bad or weak – sometimes just to turn the attention on you instead of holding themselves accountable for their own actions. They will attack your friends and people who stand up for you. These types of people will mislead others by only providing pieces of information that show them in a good light. They will corral others into believing that single side of the story, while others will race to jump on the hate wagon – its simply human nature. For whatever reason, it is rare for people to seek out the “whole truth” and psychology research reveals that people will choose to believe the worst about others and the lies because it’s easier than accepting the truth. (NBC News, Psychcentral Psychology Today) Accept this, and keep meticulous records. Download messenger chat transcripts regularly, keep all text messages and emails. Concrete evidence and facts, not emotional outbursts or tirades, will prevail. Rely on your mentors, and your tribe, to support you through it. It won’t happen every day, or even every month, but it will likely happen at some time. Very simply: be prepared.

Here is the situation where I was attacked for sharing my experience helping a dog in need. Opinions were requested in a Facebook group and I shared mine. I saw a pregnant poodle for sale on Facebook. To prevent her from being sold to a back yard breeder, I agree to purchase her. The seller starting sending me info as I left the house. As soon as I saw the breeder’s name, I looked her up on Facebook and contacted her through messenger. I thought she might have a clause in her contract. The breeder did not choose to reclaim the dog when given the opportunity, nor did the breeder discuss/ask/demand that I limit the resulting pups’ registration. During that call, she said she was glad I was going to get the dog. She later told me she was aware that the contract with the current owner was never signed.

She stated that she scrubbed the dog from her breeding program due to a gay tail; that she had tried to breed it out of the mom’s line but failed. Gay tail is not a disqualifying trait (and is even acceptable in most kennel clubs). Only after I paid thousands for the dog, sought veterinary treatment for a UTI and ear infections, confirmed pregnancy and acquired supplements, DNA tested her for poodle diseases through a vet lab and UC Davis for diversity, x-rayed her abdomen, whelped and raised 7 puppies for a momma that did not want to mother, took them to the vet for tails/dew claws and immunizations, raised them with Puppy Culture and rehomed them at 10 weeks+ for less than half the typical price for the breed, did she tell me she didn’t want to help me register them. I also have the 215 page transcript of my messenger chat with the dog buyer – its too big to load here but I am happy to email to anyone interested. It includes the sire’s health test results (although they were not uploaded to OFA). I guess the silver lining is that my website traffic increased exponentially and that bumped my site up in the algorithm! 🙂

An anonymous poster (jeez, I wonder why the person was too scared to be identified?) asked for uncensored opinions of a breeder. I shared my experience – an early experience that was an introduction to people in this field.

Click on the link to open a pdf of the post from Uncensored Opinions of Poodle Breeders (OFFICIAL) – is it really uncensored?  Note: Commenter Danelle Seinkbel is a co-breeder with Missy Scott (Missy Smith). The dog was sold with FULL registration clearly shown in the conversation below, which is also illustrated by the photo of the unlimited registration paperwork signed by the breeder/owner. 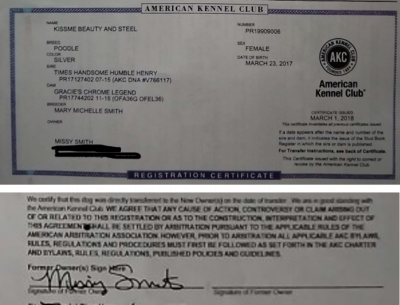 Compare the screen shots that were shared in the Uncensored group versus the full and complete Facebook messenger conversation in this messenger transcript. Note: downloads from Fb come in reverse chronological order. 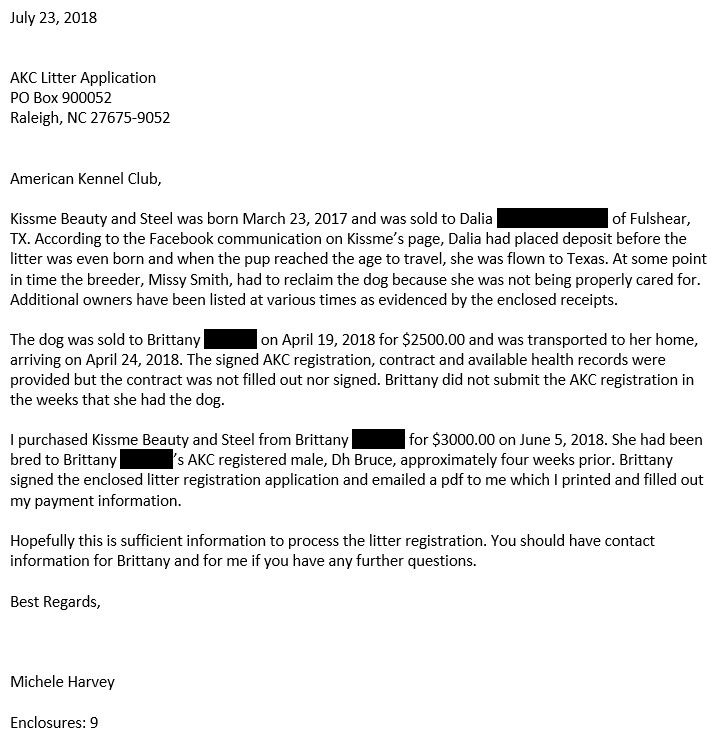 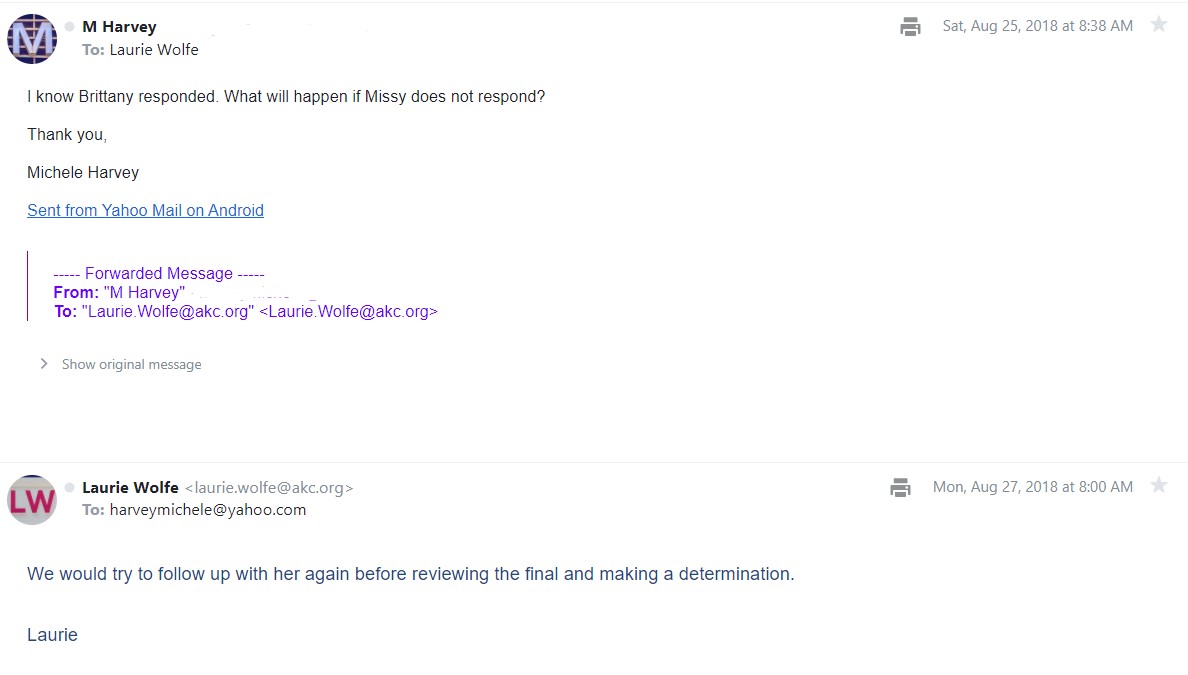 So the breeder’s claims that I did this for money, that I misled her, others who implied that I somehow ‘got around’ full registration, the breeder’s claims that I kept a puppy from the litter, and that the dog should not have been bred were solidly disproven – but the damage was already done. And the damage was not just to me, but to my associate who was unwillingly and unknowingly dragged into it by the original breeder. There will always be those who want to attack and hurt or maim others. Is that a defense mechanism or a personality issue?

Thank you to the dozens of people who reached out to commiserate and tell me that they felt bad about how I was attacked. I am sorry none of them could respond in the post (it was deleted), but I wouldn’t have wanted any of them to be attacked too!

Just to clear the air, the pup that was sold on full registration from this ‘rescue’ litter has been health tested BEYOND the PCA minimum requirements, earned the Canine Good Citizen title, a Rally title, and is a GRAND CHAMPION and a certified therapy dog. This exceeds the showing/breeding community’s expectations to qualify a dog for breeding.

Choose to surround yourself with those who will build you up, and support you even in the worst of circumstances. Did I start this? Did the original poster who asked about for information about the breeder? Does it matter? It is supposed to be a group where people can share their uncensored opinions and experiences. Readers can choose to take away what they read, or leave it. I shared my experience and was attacked; you might even say I was ganged up on. Oh well, this breeder caused me to start developing a thick skin a few years ago from my previous experience with her, in addition to similar people in the field who were also far from gracious, open and kind to ‘newbies’. I can handle the unearned vitriol and I’d rather it be aimed at me than my friends and associates. Thankfully I have been blessed with wonderful mentors and friends to flush out this kind of toxicity and keep me focused on what is really important – my dogs and their well-being.

I vow to never treat another person the way I have been treated and establish it as my mission to make the ‘newbie’ experience a wonderful one through guidance and education, and freely sharing anything I have to give that will help others. I vow to breed community!